Makeup at the workplace — friend or foe?

I absolutely love make up. In fact, I love it so much that I took a professional course and started blogging about the subject. So people who know me well know that I hardly ever leave the house without putting any makeup on as I feel naked and vulnerable without the basic coverage of at least foundation, concealer and powder on my face. If I’m seen in public without makeup then you have to worry that I’m depressed, unless I genuinely had no time before leaving the house.

In my youth, “basic coverage” consisted only of concealer as I was blessed with good skin free from acne and blemishes. Two decades later and a lot more sins to hide on my face (from stress acne, blemishes and sun spots) basic cover now consists of a lot more work: foundation, concealer, cover stick and powder at the very least. If I show up without makeup anywhere people start asking me if I’m ok because the lack of makeup makes me look tired. So for me, getting up at least half an hour earlier in the mornings when getting ready for work is part of the daily ritual.

Since I like blogging about HR work related matters but also about make-up my husband one day said to me “Why don’t you try writing about both topics in one blog! Especially on whether women feel obliged to work makeup at work”. I mulled the idea over in my head and discussed it with some of my girlfriends who pointed out to me that there is a lot of pressure on women to be presentable at work, until I finally decided to see if there is any research done on the topic. Interestingly enough there is and the results are contradictory.

According to a gender studies research paper (published in 1997 by Kirsten Dellinger and Christine L. Williams from the University of Texas) which analyzed 20 in-depth interviews with a diverse group of women working in various settings, appropriate makeup use is strongly associated with assumptions about health, heterosexuality, and credibility in the workplace. These norms shape women’s personal choices to wear makeup. Although many women find pleasure in wearing makeup, the authors concluded that the institutional constraints imposed by the workplace effectively limit the possibilities for resistance to the use of makeup.

So, does not wearing makeup at work make a woman unprofessional? There are a lot of people who believe that not wearing makeup can impact a woman’s career prospects as she may be perceived a number of things from incompetent to domineering! A more recent study explains that perception about women wearing makeup in the workplace very much depends on the observer’s gender. The study published in 2016, authored primarily by Viktoria Mileva, a researcher at the University of Stirling in Scotland, carried out 2 experiments on the topic. In the first experiment, the photographs of 40 female college students with and without makeup were presented to a group of 128 (mostly heterosexual) male and female undergraduates. The observers had to rate the photos on “attractiveness”, “dominance” and “prestige.” The outcome of this experiment was that the photos of the women wearing makeup were seen by men (but not women) as more prestigious and seen by women (but not men) as more dominant.

The researchers speculated that men do not have the tendency to view women as physically threatening, and so makeup should not affect their ratings of dominance. In addition, men may tend to see women in makeup as having prestige due to the assumption proven by previous studies that attractive people are perceived as competent. The assumption about women, on the other hand, is that they might perceive other women wearing makeup as sexually competitive and thus socially dominant and due to feeling socially threatened by their attractive peers they are blind to the competency element.

The second experiment of these researchers involved asking 48 new female undergraduates to evaluate the photos from the first experiment and answer specific questions aimed at finding out if they feel jealous. The participants judged women in makeup to be more attractive to men and more promiscuous and predicted they would feel more jealousy toward them.

Whether I agree that women see other women as competitors at work based on their makeup or not, purely from a personal perspective, wearing some “light looking” makeup makes me look presentable. That’s my norm: women wear make up at work to look presentable (unless they are natural beauties with no need for it). What’s yours? 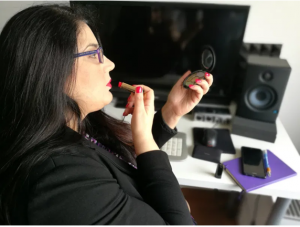 First published on ” From vanity to sanity blog on WordPress” on “February 1st, 2019”.